POS and Ecommerce by Shopify

0 products in your cart

107 reviews
202 $60.00
HMB+ Creatine is a high quality, clean and additive-free supplement that accelerates strength development and muscle repair in training athletes. HMB combined with Creatine has been shown to increase performance more than the two on their own. HMB+ Creatine contains 3g/day of HMB, and 5g/day of Creatine Monohydrate. It doesn’t contain additives, fillers or anything else you don’t need. Both HMB and Creatine are shown to increase strength with training. When taken together they have a significant impact in strength focused athletes We don’t settle for lab or animal studies. Both HMB and Creatine have been tested on training adults in published research studies. Lots of them! Both HMB and Creatine exist in your body naturally. HMB is vital to the health of your muscles where it is used to build, maintain and repair muscle cells. Creatine is stored in the muscle and acts as a very rapid, but limited source of energy for very high intensity muscle contractions.

Where your body gets creatine from: The body naturally makes 1g/d of creatine from amino acids We get about 1.5g/d creatine directly from fish and meat Where your body gets HMB from: We get about 0.5g/d HMB from foods like fish and citrus HMB and creatine both increase strength when training involves movements like deadlifts, squats and bench press. (3, 6, 10, 19 )

The HMB in HMB+ Creatine improves endurance performance in athletes running, and cycling. (5, 9)

Both HMB and creatine speed muscle mass gains with training. (2, 3, 18)

Creatine adds body water weight. This can be good for strength athletes, but can inhibit athletes working on body weight movements, speed or endurance. (20)

Both HMB and creatine have been shown to have a series of health benefits. (18, 19)

HMB+ Creatine is for: How does HMB+ Creatine work?

HMB is thought to work by slowing muscle protein breakdown and speeding protein production in muscle. This has a protective effect, reducing exercise induced damage. The outcome is you need less recovery time and will adapt to training more quickly. (18)

Creatine is thought to work by increasing the body's store of Creatine-Phosphate (CR-P). CR-P provides energy rapidly when doing high intensity explosive movements such as a clean, a snatch or a sprint start. (21) 2. Nissen & Sharp (2003): A meta-analysis of all research to date on supplementation for strength and mass. Found that HMB and creatine are the only two supplements that have been shown to enhance strength and mass with resistance training. Read the research

3. Rowlans & Thomson (2009): A meta-analysis of existing research. HMB supplementation resulted in clear overall increases in strength in men starting a resistance training program, but the benefit of HMB in trained athletes was smaller. Read the research

8. Slater et al. (2001): Controlled study in trained males. HMB enhanced strength and mass but the increases were small over the research period. Read the research

10. Panton et al. (2000): Controlled study using male and female trained and untrained subjects. The study showed that regardless of gender or prior training, HMB increases strength and minimizes muscle damage when combined with a four week resistance-training program. Read the research

13. Knitter et al. (2000): Controlled study in male and female runners. HMB reduced muscle damage after a prolonged run as well as the perception of muscle soreness. Read the research

15. Wilson et al. (2008): A review of research on HMB. Concluded that collectively there is not only clinical data, but also mechanistic data supporting HMB's effect on increasing muscle mass and strength. Read the research

17. Ransone et al. (2003): Controlled study in 35 trained collegiate football players. HMB increased muscle mass and reduced body fat however this was not statistically significant probably because the athletes only used HMB for 4 weeks so gains were small. Read the research

18. Wilson et al. (2013): The official position paper of the International Society of Sports Nutrition on HMB supplementation. HMB is one of the few supplements considered to be both safe and effective by the society. Read the research

19. Cooper et al. (2012): An updated review on creatine supplementation research by the International Society of Sports Nutrition. Read the research

21. Hall & Trojian (2013): A recent review of the science behind creatine supplementation. Read the research

7-year Crossfitter and 53 years old. First time ever taking a supplement with creatine. This product has been great! I’m PR’ing lifts and can tell a difference in my physique.

By far the best Creatine I have ever taken.

I have been taking creatine for years, and was told about HMB+ by my coach. An absolute game changer. Never noticed a difference like this from a supplement. Nice work Blonyx! I'm trying the beta alanine too. 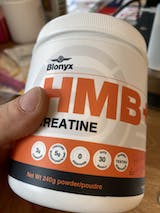 I initially wrote a 1 star review about customer service team not fulfilling what the company had promised in their subscription. Today I received a call from the company apologizing and owning up to their mistake. They rectified the situation and have set things right. In terms of the product, i have enjoyed using creatine + hmb.

I haven’t my order

Check out the cool stuff we are up to in real time!

Have questions? Send us an email! .

The email that helps you achieve your athletic ambition

What our customers say

7-year Crossfitter and 53 years old. First time ever taking a supplement with creatine. This product has been great! I’m PR’ing lifts and can tell a difference in my physique.

It tastes amazing! Best protein I have tried.
Whey doesn’t work for me and all the vegan ones are usually to sweet.
This protein is just with chocolate taste and contains minimal sweetness. Just smooth and amazing

I feel so much better later in my workouts.